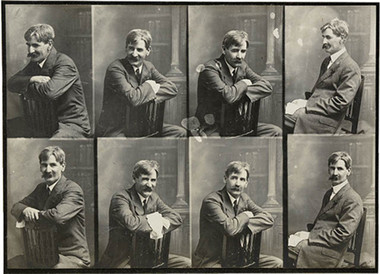 By using a 'multiplying camera' with a repeating back (which moved the glass plate negative between exposures), William Johnson was able to make eight separate portraits on a single half-plate negative. Normally, these would be cut into inexpensive prints, but he has retained them all, so that we have a range of Lawson's expressions, from serious to smiling. The multiple image repeating back was essentially a means of making a cheap portrait, although its almost cinematographic quality was appealing in the early twentieth century. The three-minute automatic photographic booth reached Sydney in 1899 and gave rise to even more uninhibited facial expressions.