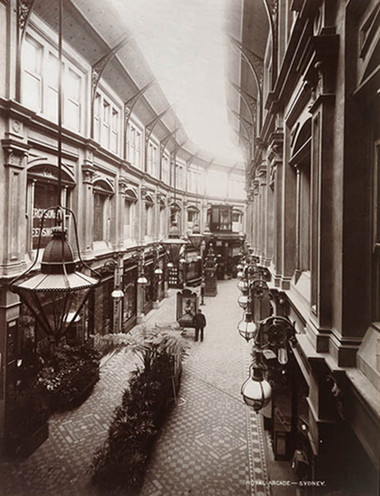 The Royal Arcade ran from George Street near the markets through to Pitt Street near the School of Arts. Over 90 metres long, it was well lit, with a lofty clerestory and gas lamps.There were 31 shops on the ground floor, 36 offices on the first floor and a photographic studio above them at the George Street end. When it was opened in 1882, hundreds of the city's leading citizens celebrated with a sumptuous banquet on a double row of tables the length of the arcade. Of Sydney's five Victorian arcades, only the Strand survived twentieth-century development, the Royal disappearing beneath the Hilton Hotel in the mid 1970s.