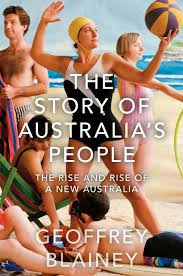 Australia is indeed made up of many peoples, and together their story is one of high drama, courage and resilience.
When the first Europeans crossed the world to settle the vast southern continent that became known as Australia, it was almost unknown. Over time it revealed itself to be a land of reward, and sometimes despair. While the physical discovery of Australia and its resources was swift, the continent also had to be discovered emotionally. Later migrants brought more diversity – and complexity – to Australian life. Writers and painters, more than any other group, probed and shaped attitudes and emotions of Australians to and about their land. Aborigines, once silent, raised vital questions.

In this book Professor Geoffrey Blainey brings to life the key events and happenings of the past 170 years that have shaped us into the nation and people we are today: the gold rushes of the 1950s, frustrations of the land explorers, Federation, the world wars, the Depression, postwar migration and prosperity, land rights and the onrush of the latest technology. He examines how people lived, worked, played and prayed over generations, and explores what differences divide us – and all we share in common.