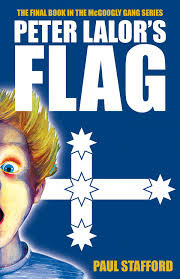 Things in Milltown are going from bad to worse. A mining company has discovered the historic village and its water supply are built on top of a massive gold deposit and they’ve won the right to drain Milltown dam, move the town to a less sparkly site, and dig a huge open-cut mine. And while the majority of Milltown might not approve, it’s the law of the land. The fortunes of the McGoogly Gang are no shinier. Dad McGoogly is still unemployed, Mum is set to lose her job when the local hospital closes, and the boys can’t seem to agree about who should be allowed to use their time travel apparatus. Nige and his new mate Charles Lee want to go back and join Charles’ ancestors who came to the bush from China during the goldrush, and he won’t take no for an answer. Having tangled with Ned Kelly and Matthew Flinders with mixed results, Andrew wants to find an object he can legitimately ‘collect’ from the churn of history without being accused of theft, and he thinks he’s found it at the Eureka Stockade. He needs help to pull it off, but Robbie is too busy having a crush on Leona, Frances is fighting a rear-guard action against the new super-smart girl in her class, and Nige is spending all his spare time at Charles Lee’s house. Revolution is brewing and nobody feels safe. Robbie isn’t talking to Nige, Mrs Shortbeam is cranky with Ms Bracker, Dad is sliding downhill into a terminal depression and Andrew is convinced the whole village is about to be destroyed to satisfy one man’s lust for gold.