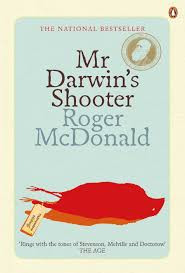 The story of Syms Covington, Darwin's manservant on the Beagle and afterwards.

Last century Charles Darwin set out on a voyage in the Beagle that would change forever the way human history was viewed. It was on this voyage that Darwin collected the information that gave birth to his controversial Theory of Evolution.

This is a novel of scientific discovery, of religious faith, of masters and servants, and of the endless wonder of the natural world. But its greatest triumph is Covington himself, the boy who looked up at the beckoning figure of a yellow-haired Christian in the stained glass window in his boyhood church of Bedford, and sought to follow.

He leaves Bedford as a lad of 13 and goes to sea with the evangelical sailor John Phipps and becomes one of Phipps' 'lads'. But Phipps' catechising can't repress Covington's passage into manhood, nor prevent him chasing the exotic native maidens of Tierra del Fuego. When next he returns to sea it is to serve on the Beagle.