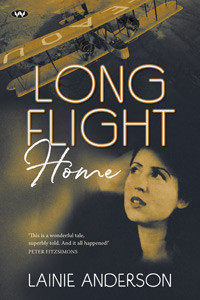 The First World War is over and air mechanic Wally Shiers has promised to return home to his fiancée, Helena Alford. But Wally never reckoned on charismatic fighter pilot Ross Smith, and an invitation to compete in the world's most audacious air race.

A £10,000 prize has been offered for the first airmen to fly from England to Australia. Smith is banking on an open-cockpit Vickers Vimy, a biplane with a fuselage that looks ominously like a coffin.

And who can resist a hero? Wally writes to Helena to say he won't be home for another year - and the love of his life is left holding her hand-stitched wedding dress ...

Using war diaries, letters and Churchill Fellowship research from along the race route, Long Flight Home recreates one of the most important - and largely forgotten - chapters in world aviation history.