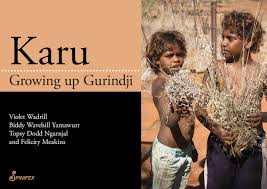 Gurindji country is located in the southern Victoria River in the Northern Territory of Australia. Gurindji people became well known in the 1960s and 1970s due to their influence on Australian politics and the Indigenous land rights movement. They were instrumental in gaining equal wages for Aboriginal cattle station employees and they were also the first Aboriginal group to recover control of their traditional lands.

In Karu, Gurindji women describe their child-rearing practices. Some have a spiritual basis, while others are highly practical in nature, such as the use of bush medicines. Many Gurindji ways of raising children contrast with non-Indigenous practices because they are deeply embedded in an understanding of country and family connections. This book celebrates children growing up Gurindji and honours those Gurindji mothers, grandmothers, assistant teachers and health workers who dedicate their lives to making that possible.