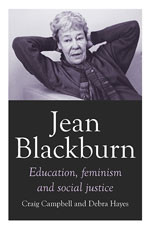 Jean Blackburn devoted much of her working life to the development of socially just education policy. From the early 1970s she worked with Peter Karmel on the most significant government report framing school policy in the twentieth century, the blueprint for the Australian Schools Commission. And she was the architect of both the Disadvantaged Schools Program, which revolutionised the delivery of education by public and Catholic schools, and the Girls, School and Society report of 1976. Following the release of his 2011 report on government funding of schools, David Gonski pointed to the enduring relevance of Blackburn's contribution. She was, in Raewyn Connell's summation, “the most influential feminist educator in Australian history”. In this innovative biographical study Craig Campbell and Debra Hayes make clear the profound influence of Jean Blackburn on Australian society and also show the social worlds she moved in and through, and the personal struggles she faced as a political radical, housewife, mother and feminist.