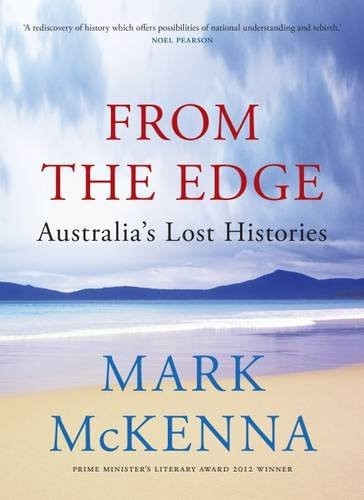 From The Edge: Australia's Lost Histories

"March 1797. Ninety Mile Beach, Victoria. Five British sailors and twelve Bengali seamen swim ashore after their longboat is ripped apart in a storm. The British penal colony at Port Jackson is 700 kilometres to the north, their fellow-survivors from the wreck of the Sydney Cove stranded far to the south on a tiny island in Bass Strait. To rescue them and save their own lives, they have no alternative. They set out to walk to Sydney. What follows is one of Australia's greatest survival stories and cross-cultural encounters. In From the Edge, award-winning historian Mark McKenna uncovers the places and histories that Australians so often fail to see. Like the largely forgotten story of the sailors' walk in 1797, these remarkable histories-the founding of a 'new Singapore' in West Arnhem Land in the 1840s, the site of Australia's largest industrial development project in the Pilbara and its extraordinary Indigenous rock art, and James Cook's meeting with Aboriginal people at Cooktown in 1770-lie on the edge of the continent and the edge of national consciousness. Retracing their steps, McKenna explores the central drama of Australian history- the encounter between Aboriginal and non-Aboriginal Australians-each altered irrevocably by the other-and offers a new understanding of the country and its people."