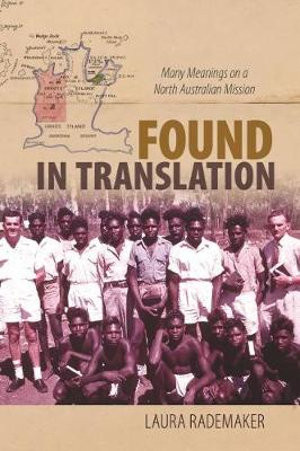 Found in Translation Many Meanings on a North Australian Mission

Found in Translation is a rich account of language and shifting cross-cultural relations on a Christian mission in northern Australia during the mid-twentieth century. It explores how translation shaped interactions between missionaries and the Anindilyakwa-speaking people of the Groote Eylandt archipelago and how each group used language to influence, evade, or engage with the other in a series of selective "mistranslations." In particular, this work traces the Angurugu mission from its establishment by the Church Missionary Society in 1943, through Australia's era of assimilation policy in the 1950s and 1960s, to the introduction of a self-determination policy and bilingual education in 1973. While translation has typically been an instrument of colonization, this book shows that the ambiguities it creates have given Indigenous people opportunities to reinterpret colonization's position in their lives.

Laura Rademaker combines oral history interviews with careful archival research and innovative interdisciplinary findings to present a fresh, cross-cultural perspective on Angurugu mission life. Exploring spoken language and sound, the translation of Christian scripture and songs, the imposition of English literacy, and Aboriginal singing traditions, she reveals the complexities of the encounters between the missionaries and Aboriginal people in a subtle and sophisticated analysis. Rademaker uses language as a lens, delving into issues of identity and the competition to name, own, and control. In its efforts to shape the Anindilyakwa people's beliefs, the Church Missionary Society utilized language both by teaching English and by translating Biblical texts into the native tongue. Yet missionaries relied heavily on Anindilyakwa interpreters, whose varied translation styles and choices resulted in an unforeseen Indigenous impact on how the mission's messages were received. From Groote Eylandt and the peculiarities of the Australian settler-colonial context, Found in Translation broadens its scope to cast light on themes common throughout Pacific mission history such as assimilation policies, cultural exchanges, and the phenomenon of colonization itself.

This book will appeal to Indigenous studies scholars across the Pacific as well as scholars of Australian history, religion, linguistics, anthropology, and missiology.