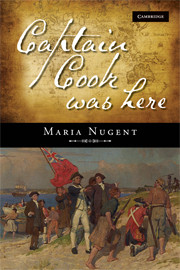 "Over eight days and eight nights in late April 1770, Captain Cook and the men of the Endeavour made their first extended landfall on the east coast of New Holland. The ensuring events and interactions between the voyages and the indigenous inhabitants were marked by drama and intrigue, courage and fear." But the story does not end with the Endeavour sailing away. The original encounter on land between the British mariners and the first American has been one of Australia's founding legends. Bringing together first-hand historical accounts, oral narratives, surviving objects and artefacts plus much of the artwork produced during Cook's time on shore, Maria Nugent takes a challenging new look at the impact of Cook's arrival on the land and on its people.