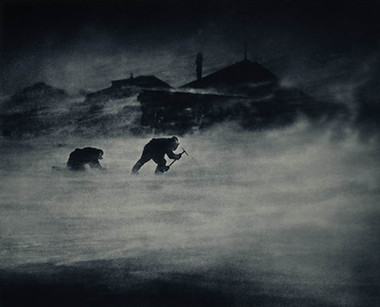 Expedition members Leslie Whetter and John Close collect ice for drinking water outside the Australasian Antarctic Expedition (AAE) winter quarters at Cape Denison. This was a daily task, although Frank Hurley's photograph imparts a heroic atmosphere to their mundane activity. Hurley was the official photographer to the AAE, but other individuals also took photographs. The State Library holds over 2100 negatives, taken by 20 members of the AAE during 1911-14. Nevertheless, the 480 large-format photographs taken by Hurley best convey the harsh grandeur of the coldest, the windiest and (paradoxically) the driest place on Earth.