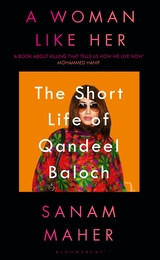 A Woman Like Her The Short Life of Qandeel Baloch

A beautiful woman in winged eyeliner and a low-cut top lies on a bed urging her favourite cricketer to win the next match. In another post, she pouts at the camera from a hot tub. She posts a selfie with a cleric, wearing his cap at a jaunty angle. Her posts are viewed millions of times and the comments beneath them are full of hate. As her notoriety grows, the comments made about her on national talk shows are just as vitriolic. They call her Pakistan's Kim Kardashian, they say she'll do anything for attention. When she's murdered, they're transfixed by the footage of her body.

Drawing on interviews and in-depth research, Sanam Maher pieces together Qandeel's life from the village where she grew up in the backwaters of rural Pakistan, to her stint in a women's shelter after escaping her marriage, to her incarnation as a social media sensation and the Muslim world's most unlikely feminist icon.

Sanam Maher is a journalist based in Karachi, Pakistan. For more than a decade, she has covered stories on Pakistan's art and culture, business, politics, religious minorities and women. Her work has appeared in the New York Times, Al Jazeera, The Caravan, Roads and Kingdoms and Buzzfeed. A Woman Like Her is her first book.

A breakthrough book, A Woman Like Her bracingly illuminates an increasingly global if yet under-covered phenomenon: the tragic collision between the forged selves of social media and the brute realities of ordinary life. It also describes, with rare intimacy, some profound cultural tumult in a society that is largely known for its political dramas -- Pankaj Mishra
A terrific achievement. Sanam Maher's sensitive, nuanced portrait restores humanity, in all its complexity, to her subject -- Olivia Sudjic, author of Sympathy
Written without judgement, without pandering, without reducing its subject to a stereotype, this book is brilliant and terrifying -- Meena Kandasamy, author of the Women's Prize shortlisted When I Hit You
A book about killing that tells us how we live now. Sanam Maher has her ear to the ground and a storyteller's voice that is intimate and yet soars to the skies. -- Mohammed Hanif
In her excavation of the life of the defiant, glamorous Qandeel Baloch, Sanam Maher has put out the highest calibre of investigative journalism, written with tragedy, poetry and passion befitting of its subject -- Molly Crabapple, author of Drawing Blood
Only one of Pakistan's finest young writers could carry weighty themes like honour, fame, and violence with such deliberation and poise -- Fatima Bhutto
Qandeel was a marvellous blaze. She set our dark world on fire and made enough light to expose the hypocrisies of Pakistan's pious patriarchy. In Sanam Maher's terrific and necessary book, these flames burn brighter than ever -- Sonia Faleiro